Friday afternoon, I sat down on the couch and realized that I was surrounded by knitting bags!  Here’s what’s on the needles in this first week of February.

Last month, I started working on the CustomFit version of the Featherweight Cardigan.  I’m using Knit Picks Alpaca Cloud Lace yarn and I’m using this project to learn to knit on a knitting belt!  I’ve got about five inches of the back completed and I’m getting faster.  My goal is to be able to walk and knit using the knitting belt, but so far, I can just meander between the kitchen and the living room.

Last year at Stitches West, I took JC Briar’s class on Beginning Brioche.  The handout included a chart for us to practice our increases and decreases and shortly after the class I got some Malabrigo Rios in Black and Jupiter and started the chart as a scarf.  As Stitches West is coming up again at the end of the month and I have another class with JC (this time it’s Slick Set In Sleeves), I thought I’d try to finish it before the show. 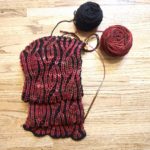 I’m continuing to make progress on my Wynne Shawl by Sarah Jordan.  I started this as part of the Indie Designer GAL on Ravelry, but realized after Christmas I couldn’t finish it by the deadline and that its long rows of garter were so great as a knitting group project.  I bring this with me to my Saturday knitting group and to guild meetings and it will get done eventually. 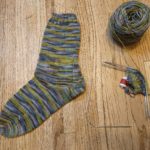 I’m working on the second sock of a pair from the pattern Vanilla is the New Black by Anneh Fletcher.  It has an unusual heel construction and I’ve been using the p

attern to try out the Addi Flexi Flip needles I got at Vogue Knitting Live in Seattle.  I really like the pattern and it makes a nice heel that’s good for a high arch, but is easier than working a heel flap and gusset.  The needles are similar to working with Magic Loop and a bit easier than three or four DPNs.

Finally, I’m working on a secret knitting design that should be complete in the next few months or so.  More details on that when it comes out!

On the CSM, I’ve completed a few more pairs of socks and made a hat from a double layer of laceweight yarn.  You can find the details of how I did that on my Ravelry project page. 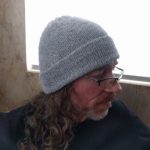