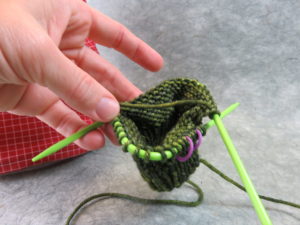 I recently purchased some curved DPNs and for my first project I made a couple of pairs of fingerless mitts from a pattern by Clara Parkes in her Craftsy class, Stashbusting (it appears to be very similar to this pattern on Ravelry).  I purchased the Neko Strickespiel curved DPNs from Candra’s Yarn Paradise on Etsy.

Basically, they are a set of three bent DPNs made from a slightly flexible plastic.  Each of two needles has about half the stitches on it and you curve the waiting stitches around one needle while you push together the ready to work stitches on the other needle so that you have the triangle shape you would get working with three traditional, straight DPNs.

Advantages:  I liked working with them because there are only two needle changes per round, similar to working with a magic loop, but without the extra cables hanging out.  I like using magic loop, but with small objects like mitts or socks I often feel like I have more needles and cables than yarn in action!  I felt like my rounds went faster than when I use a regular DPN set or magic loop.  There were less pointy things sticking out than with straight DPNs, which made working on a small object seem easier.

Disadvantages: The needles have some gaps on the small end of sizes, missing some of the US sizes that are listed in patterns.  I also had trouble with laddering where the two needles met in my work.  I don’t usually have trouble with laddering on straight DPNs.  Because of their shape, the trick of moving the location of your needles as you work was not easy to do.  I found that if I tugged on both the first and second stitch each time I rotated to a new needle, the laddering disappeared for me.

Tricky bits: I watched this video on the Neko page to help me figure out how to hold the needles.  With straight DPNs, I usually rotate the needle I’m working stitches off of to be on top of the other needles with a little under/over flip of orientation as I start each needle.  With the Neko’s, I found that working one needle on top of the other two ends and one needle under the other two ends was the best strategy for fast changes between needles.